Can anyone explain the difference between the following sentences:

When I should use the first one and when the second one?

It's not as easy as it seems. In fact, it's very complicated.

If they are in their proper position, they «stand» (e.g. an opened laptop, a flower in a vase). If they are folded or placed wrong, they «lie».

Mostly they always «lie». But sometimes they may «stand» (I don't know when) but there are few examples:

There is no simple rule about using “лежит на столе” and “стоит на столе”. We even have a joke

Easy going explanation for you: 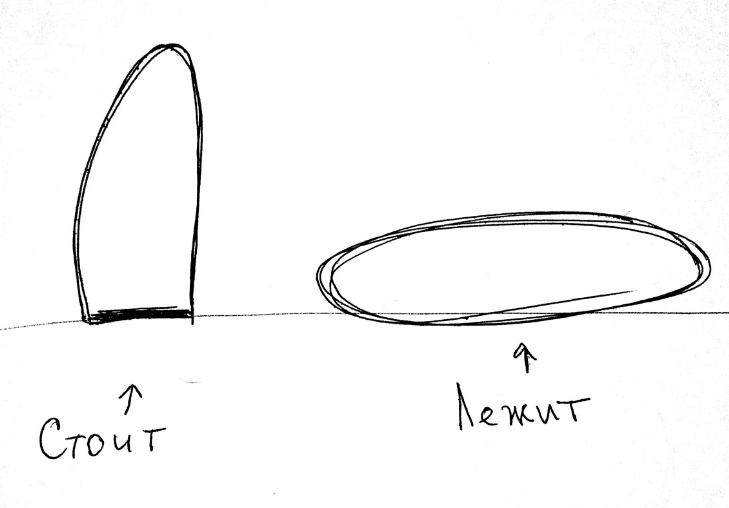 I suppose that everything long — стоит; everything horizontally-oriented (like laptop) — лежит. In some situations you need to remember word choice.

I think this should be explained to a foreigner in a different way than explaining horizontal and vertical positions. A non-Russian speaker should imagine that the object that is positioned on the table is in fact a creature (animate object).

English has the verbs to stand and to lie but they normally only used with people or mammals. The person should think that if the book would be a creature and it was in its current position, what would he/she say about this creature: stands or lies. If stands would be more appropriate for creature - say stands for the book, say lies otherwise.

As always, there will be exceptions from the rule which need to be memorized.

Let's look at the тарелка стоит на столе. The plate is ready to serve you - to hold the food. Of course, it is standing. :-) If the plates are put in the box for moving, for example, they will be положены (lying). I.e. стоять и лежать also has the connotation of being in a working position or in an out-of-work position.

Also, it seems the story of how difficult it is to explain to English speaker the difference between stand and lie for objects is a bit exaggerated. It is kind of "new urban myth" - a nice story to retell and have fun. In fact, in English standing and lying is also used for objects (but not usually stand and lie). You cannot say: CN tower stands in downtown Toronto. But you can say: CN tower is the world's tallest free standing tower. The same for lying: He checked the pile of dirty cloths lying on the floor. So, it is quite clear to the English speaker that stands/стоит denotes a vertical position, and lies/лежит denotes a horizontal.

Here is the explanation which we used in an introductory course. One of the things we emphasized was that you cannot treat Russian words as one-for-one replacements for English words. You have to treat them as words in their own right with their own definitions. Therefore we defined the verbs used in these expressions:

лежать--to lie fallen or stretched out. A knife can лежит and will unless you stand it up inside a glass or stick it into the table. I drinking glass will лежит if you knock it over. A dinner plate cannot лежит because it is not tall enough to fall over!

стоять--to stand in a vertical position, possibly on some kind of foot. A boy can стоит on his feet. Drinking glasses стоят on their bottoms which are a kind of foot. Dinner plates стоят too!

сидеть--to “sit” in the sense of occupying a sunk down but still upright position. A boy can сидит on a table or chair, but a drinking glass cannot because it has no legs to fold.

These definitions are intended as a starting point for beginners. They obviously will not cover all cases where one must choose between стоять, лежать, and сидеть.

We also prepared a video demonstration which you can see here: http://www.readyrussian.org/Videos/Motion%20and%20Location/

In Russian the position of an object must be made explicit. You can't simply say "The book is on the table.", instead, you need to specify whether the book is in horizontal or vertical position. This applies not only to the "state" verb, but also the "movement" one. When you talk about "putting something", you must specify how in those cases too.

This is a simple table that exemplifies it:

Книга лежит на столе.
The book is on the table (horizontal).

Я положил книгу на стол.
I put the book on the table (horizontal).