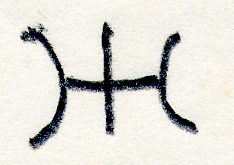 Could this be a Ж?

Two hundred years ago a young, literate Russian immigrant to Mexico claimed his cattle brand. Usually these were just Latin letters, with some flourish or packed together, or else a couple of lines and curves combined into a small fanciful figure. We have the above rude images, redrawn an unknown number of times, from a younger record at the state capital.

This brand doesn't stand out much unless you think it looks like being a Ж and an inside joke by the only Russian speaker in the community. I know the Ж is not usually written quite this way, but it's hard for me to exclude the possibility that it be one.

Could Ж in some way relate to livestock, or to his immigrant status? Other suggested interpretations are more than welcome.