"Скатертью дорога" - was it ever a positive thing after all?

There is a well known phrase "скатертью дорога" which is sort of caustic version of "good riddance". There's also a common knowledge that this phrase initially meant something exactly the opposite from what it means now, namely, it was sort of Russian "Bon voyage". And then this original meaning gradually faded away and finally what was actually the ironical rethinking became the main usage.

The thing is I'm failing to find any sources on this being true - there's no evidence of "скатертью дорога" ever used as some positive wish.

My question would be - when exactly this phrase came to usage and what exactly it meant back then?

Here's the earliest reference I was able to find. This is from a play written by Ivan Mikhailovich Dolgorukov, who lived at the end of XVIIIth - beginning of XIXth century:

It's actually already quite ironical.

The positive wish meaning is not mentioned at all. In comments there are some examples of positive usage dating back to XIXth century. While those are nice finds, that by itself proves nothing. For instance, this could be a later development. 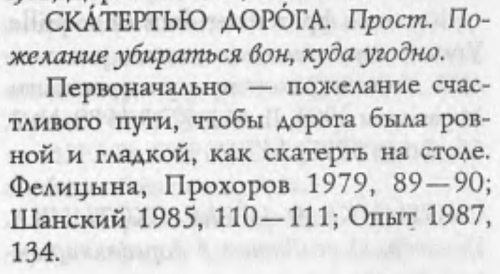 I personally have seen it used in its original (positive) sense a couple of times in folk tales. There's also a similar (but really rare) expression "зеркалом дорога".

At present Скатертью дорога has only negative connotation. In positive context this phrase mostly sounds outdated and can rarely be used.

By saying Скатертью дорога about a person the speaker demonstrats he's relieved that the person's gone and he was annoyed with the person's presence before and he means no harm, but have no desire to meet that person again.