What semantic notions underlie 'to see, show' and 'order'? [closed]

Want to improve this question? Add details and clarify the problem by editing this post.

Please see the screenshot (original) with my question inscribed: 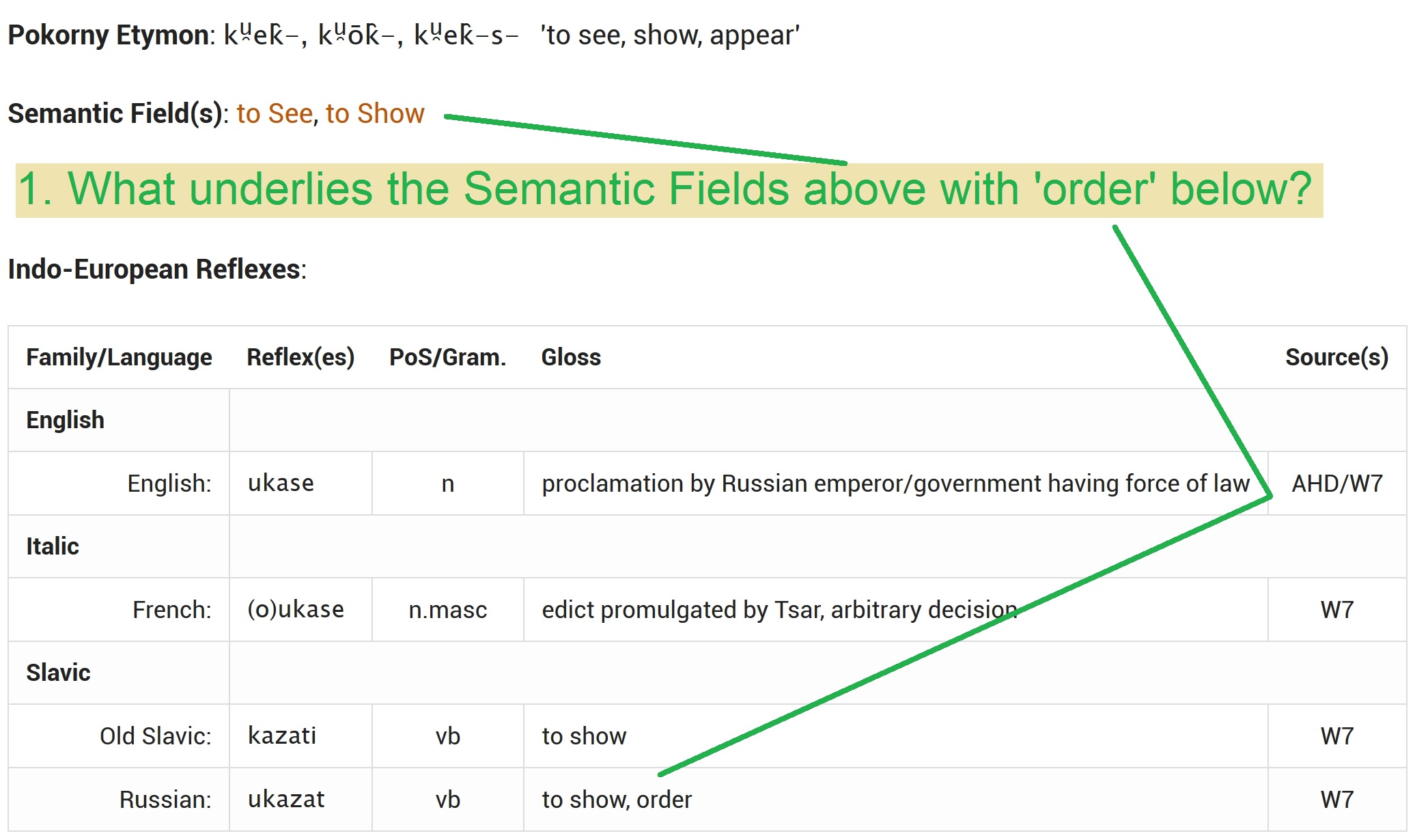 Указ is a type of a formal order

A real life example: when a master orders (приказывает or даёт указание/приказ) a servant or a slave to do something he might indicate that with a gesture of finger pointing (указывает) to the side as if showing (показывает) what he must do

A gesture of finger pointing can be interpreted as drawing someone's attention to the object being pointed at, and so showing them that object.

In Russian as in English index finger is указательный палец, because it's used for indicating/pointing at (указывать) things and as it were revealing them to others, or showing.

With regard to semantic link with to see, to me it seems rather weak. Other than the fact that seeing could result from indicating/pointing at/showing it could be said that the verb видеться, a cognate of видеть, is a synonym of the verb казаться, itself a cognate of указ, and that another way of saying по-каж-и! (show me) might be дай/позволь по-смотр-еть! (let me see/let me have a look).

The verb ukazat (указать, указывать) comes from the noun указ which means decree, ruling. This was typically used for decrees issued by Tsars. Thus, the original meaning of указать is to give order/direction to do something or to behave in a certain way. Nowadays this meaning is often used within family context, for example a teenage child fed up with parents' orders might say to them "кончайте мне указывать!" ("stop telling me what to do!").

Now, the more common meaning of указать is to show, demonstrate, point someone to something specific or some detail within a wider area, especially when that someone is seeking the detail. For example, the police may bring a robbery victim in front of several suspects and ask the victim to указать (show/point to) the one who robbed him. Or a criminal may, while interrogated, указать (show/reveal/disclose) his accomplices. Or one may указать the location of the treasure on the Treasure Island map.

The meaning of "to see" is no more relevant in this context than the fact that the person being showed something can / supposed to see it.

3
What is the etymology of чашка? Какова этимология слова "чашка"?
2
A problematic etymology of a 'three-letter' Russian profanity
12
Why "Гиппократ" but "ипподром"?
5
Махать платочком - which specifically and why?
8
How did 'ликвиди́ровать' semantically shift to mean 'abolish' and 'destroy, kill'?
4
What does "не" negate in "нечто" and "нехай"?
3
What is the actual origin of the aphorism about intentions and capabilities?
8
What are the meaning and etymology of "выпендриваться"?
2
Is there a link between the word "horse" and "rot"?