I've created this sign for a bathroom in a property that I rent out: 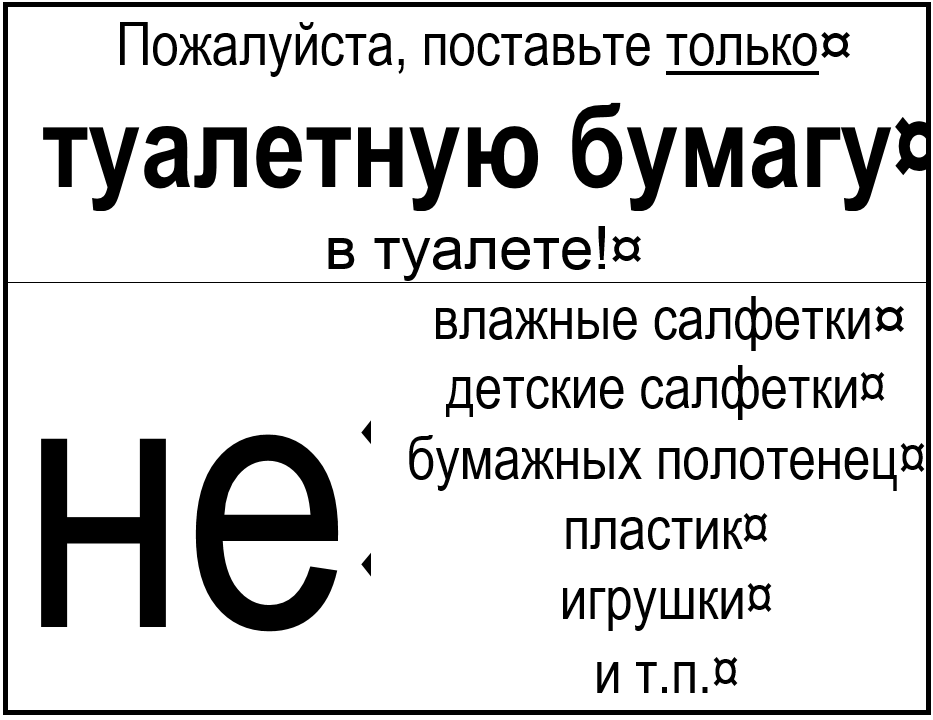 (And yes, before you ask - I have fished several such items out of toilets in the past.)

Is the wording correct? I'm particularly uncertain about не vs. нет, but any other pointers would be appreciated.

Edit: my apologies for not reading the site rules carefully, and thanks to those who provided constructive comments. As one of them is that I shouldn't have posted just an image, but rather the text, here it is:

For comparison, I have the same sign (with the same layout) in some other languages, such as English:

...and so I'd like as much as possible to keep the same flow. If indeed it's not idiomatic Russian to give a list with не/нет followed by a number of items, then so be it. But I would wonder: you find, for example, apartment buildings in the U.S. that have such signs outside (NO in large type, followed by a list of things not to do: ball playing, loitering, etc.); are such signs unknown in Russia?

The phrase with NO will be

But bear in mind that is sounds very official and angry.

If you mean to be more friendly, you can use the following:

Поставить в туалете means to put sth. that can stand in the restroom, e.g., a vase, or a toilet paper roll if you put it vertically on a shelf.

I personally haven't come across signs in Russian designed in a model you mention. Rather it would be a simple enumeration of objects/activities with no fancy formatting.

As for the verbiage, the idiomatically Russian one would look something like the following:

In case if by пластик you really mean plastic bags, then it needs to be replaced with целлофан.

To model the verbiage in the English style you propose

But in my opinion this is not formal enough for a sign if formality is important.

Not the answer you're looking for? Browse other questions tagged usage particles or ask your own question.

11
Idiomatic Signage: "No children", "Children not allowed on table", etc.?

3
usage of вы гляньте
8
Usage of пока-пока
10
Reason for infrequent usage of оно
4
Usage of Вот именно!
3
Usage of "вот только"
3
common-usage term for pre-1861 Russian agriculture system?
2
Usage of "Ничего, если ... ?"
4
Usage of "рваться"
1
In what category does soft sign and hard sign fall into?