Can you use the word "муть" in a conversation, or is it a profane word?

I took it from a popular song:

but it seems (from the reaction I got) that this particular word is considered to be slang / a swear word not to be uttered in polite company.

Edit: thanks for the quick answer :) Sorry, I can't upvote, not enough rep.

It's a word sometimes used colloquially to criticize something like a book or a film (the days of life here), with scorn or disrespect. Examples: этот фильм - полная муть, эта книга - муть какая-то. So yes, it is only for informal usage in a company of people who know each other well.

This word does not have a negative connotation. The usage of some of its meanings is less popular nowadays (like the one in your example), while the most popular meaning (something that does not make sense) is also the most recent one (hence a wrong assumption that this word relates to a teenage slang). But nonetheless you can certainly utter this word in a polite company.

"Муть" has several meanings: (1) the most direct one would be describing an unclear precipitation in water, e.g. "какая-то муть в воде плавает"; (2) other meaning could be for something in a foggy state, e.g. in nature, more commonly used in a form of a stemmed adjective "мутный", e.g. "мутная река"; (3) you can also describe a lack of clarity, e.g. "мутная голова", (4) or sadness in your state of mind - this meaning would be the most applicable to your example "Без тебя такая муть", and finally, (5) the most colloquial usage to describe something confusing, which does not make any sense, e.g. "Эта задача такая муть". But even in the last meaning the word does not express scorn or disrespect, it is not rude by itself, indicates mostly confusion and lack of understanding. Rudeness can come from the way a person reacts to any such situation, within some context (to what most people refer here), but it doesn't have to do with the language itself and more with used facial expressions/gestures/whatever else is said.

Here is the first googled example in the literature's usage, indicating that this word is not only colloquial and surely not limited to slang, a snippet from Marina Tsvetaeva's poem:

Despite the OP's vote for the best answer, and having in mind that this word is not as simple as some of the answers and comments imply, and in the spirit of stackexchange to provide CITED sources, I felt the need to suggest an answer. 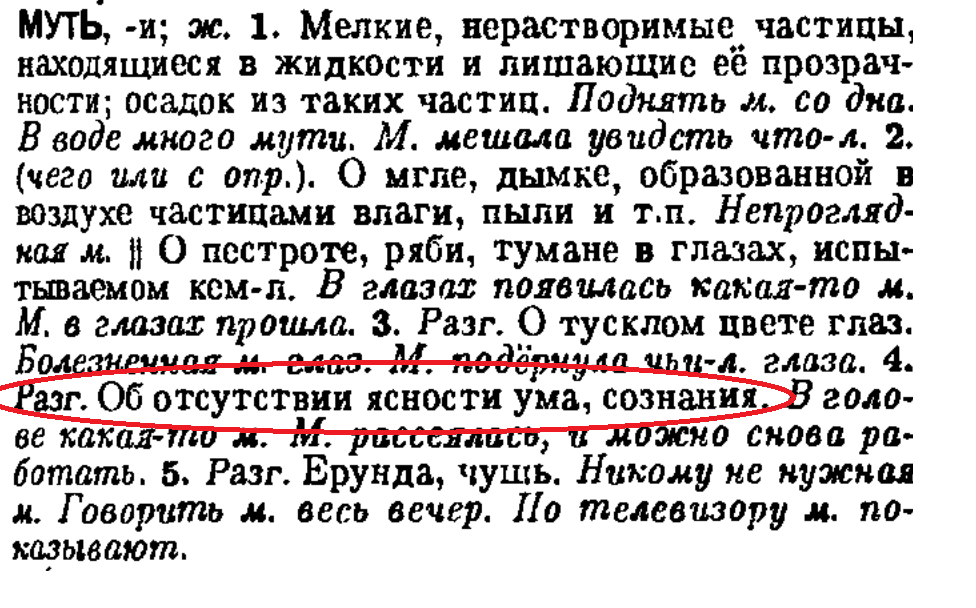 I think that in the song the 4th sense is used (see the red circle in the pic), i.e. WHEN YOU ARE NOT WITH ME, MY MIND IS NOT CLEAR. This use is quite poetic. Not archaic, not rude.

Some of the comments here mention a ruder sense which is No. 5 - this is similar to English 'bullsht', or 'sht'. But I don't think this song implies this meaning.

So this word is NOT always rude. All senses must be considered.

This word definition comes from мутный, but in this case мутный does not describe fluid state. In this context you may say мутный парень that means strange guy.

So Без тебя такая муть means Without you my future is undefined and strange, also you may say I've no future without you.

The meanings of the words in songs are frequently distorted or far from typical. It means that you would normally have to avoid using that word in the meaning stated in that song, either it is colloquial or profane situation. You can use it in discussion of popular entertainment items (books, movies etc) in the meaning of "it is totally messed up" - "это муть какая-то". In that way it is perfectly OK.

This word is informal and means "haziness, muddiness, blurriness" as about a semi-transparent liquid or glass.

I would consider it a teenage slang, the more standard word for the thing is мутность.

1
Does one use (still) / did one really used once гангрена (проклятая)! as curse word, as it appears in Двенадцать стульев?
4
Can you provide translation to this Russian profanity?
5
How old and widespread is the word "холодос"?