How to properly translate the key phrase of Erdoğan's 2016 letter to Putin, "kusura bakmasınlar," to Russian

My question is this: What is the proper or most usual/standard way to translate the Turkish common phrase "kusura bakmasınlar" to Russian?

Let me now explain why I got interested as well as the meaning and usage of that Turkish phrase and the research I have done.

Russian media and the Russian presidential website claim that Turkey's President Erdoğan apologized for shooting down a Russian military plane in his 2016 letter addressed to Putin (link1),(link2), but a central Turkish news agency, Anadolu, claims that the letter "did not include any words of 'apology'" (link3).

According to Erdoğan's spokesman İbrahim Kalın, the exact original expression in the letter is as follows:

"Diyorum" means "I say," and "kusura bakmasınlar" is a form of the common Turkish expression "kusura bakma." "Kusura" is the dative case of the noun "kusur," which is defined in Wiktionary as "defect, fault, flaw," whilst "bakma" is the second-person singular negative imperative of the verb "bakmak," which is the Turkish verb for "to look," so the literal meaning of "kusura bakma" is "do not look at the fault." Here is how a native Turkish speaker explains the usage of "kusura bakma":

For example, you are at your friend's house, you dropped the glass and it got broken, you would say: Kusura bakma, or Kusuruma bakma lit. please neglect my fault. Or perhaps, you met a friend of yours after a long time, he used to be married but not anymore, however you don't know that. You might say: "So, are you two still dreaming about having twins?". He would tell you that he got divorced, to which you could say: "Aah! Kusura bakma ya...". (Source)

Another native Turkish speaker told me via Facebook that the purpose of saying "kusura bakma" is to inform that the fault was unintentional. "Bakmasınlar" is the third-person plural negative imperative of the same verb "bakmak" (link) and literally means "they should not look," so "kusura bakmasınlar" literally means "the fault should not be looked at." This sounds different from the official Kremin translation ("извините") and seems to confirm the words of the Anadolu news agency that there was no apology.

What I am looking for is how "kusura bakmasınlar" is usually translated to Russian in, e.g., books or movies. The key question for me is whether the official Kremlin translation is different from the standard practice of translating that phrase to Russian.

I did my own research, but it has not been fruitful. In Reverso there are no Turkish-Russian translations. Reverso has a few Turkish-English translations of that phrase, but they are conflicting - "regrets" vs "apologies." On the Internet I found conflicting statements as to what Russian translation is correct, with the suggested variants being "не взыщите," "не обессудьте / не судите строго за ошибку," and "извините." I was unable to find any examples of translation of that phrase in books or movies.

Here is what good Russian-Turkish dictionaries printed before 2015 write about kusura bakma. 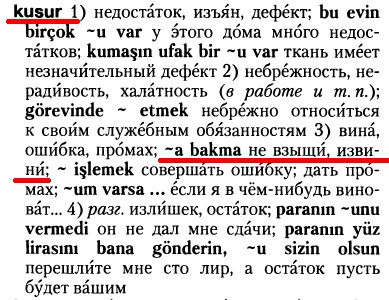 The next one is by a famous Soviet turkologist Nikolai Baskakov: 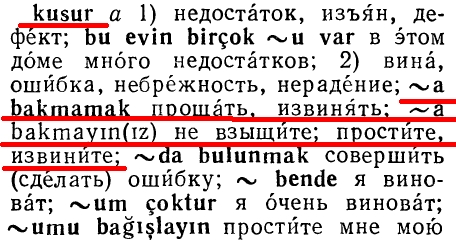 As you can see, both dictionaries translate the phrase as простите, извините, and also as не взыщите which I like the most, since the Turkish expression really does not contain Turkish verbs for прощать or извинять. Не взыщите actually means the same, but it is constructed more like the Turkish phrase, with a negation, and it can be roughly translated as "don't make me pay [for it]; don't prosecute [me], do not hold it against me".

My answer may sound flippant but based on what i've managed to gather from your explanation, semantically (not stylistically) suitable Russian equivalents may be slangy imperatives забей and не заморачивайся.

The first 2 variants you listed are good literary alternatives.

My suggestions stem from my understanding of the phrase connotation in the exchange between Erdogan and Putin. In the situation of a broken glass the slangy and colloquial expressions i mentioned will sound inconsiderate and rude just as they would in a diplomatic correspondence. And they aren't suitable semantically at all in the situation with a divorced friend. In Russian in such situation one would either say a, извини, не знал (women ой, извини, не знала) or without apology simply а, не знал (ой, не знала), because there's essentially nothing to apologize for. For having semblance of apology сожалею can be said.

6
How to translate «State of the art»?
4
How does one translate "one" (as in this very question)?
6
How to translate "Doing what makes you feel fulfilled"?
5
What is the Russian equivalent of the phrase "as in"?
13
Why is the Turkish president's surname spelt in Russian as Эрдоган, with г?
0
How can I elegantly translate gerundives to Russian?
1
Translate 'Loves' at the end of a letter
6
How should I understand and translate "закатить истерику"?
9
Are there Russian words for "close-minded" and "open-minded"?