As we all know, acceleration is a derivative of velocity, and if we want to introduce how fast acceleration is changing itself, thus, introducing second derivative of velocity - this is called actually a jerk (or jolt). In Russian it is called "рывок" (I've also encountered term "толчок"), so, we can say that "ускорение ускорения называется рывком".

We can go further and introduce third, fourth and so on derivatives of velocity, every next one is more exotic beast and used noticeably rare in calculations. However, they do exist, and, according to Wikipedia, they are called in English respectively "jounce" (or "snap"), "flounce" (or "crackle") and "pounce" (or "pop").

My question would be - are there well established and commonly acknowledged by the scientific community Russian terms for third, fourth and fifth derivations of velocity? 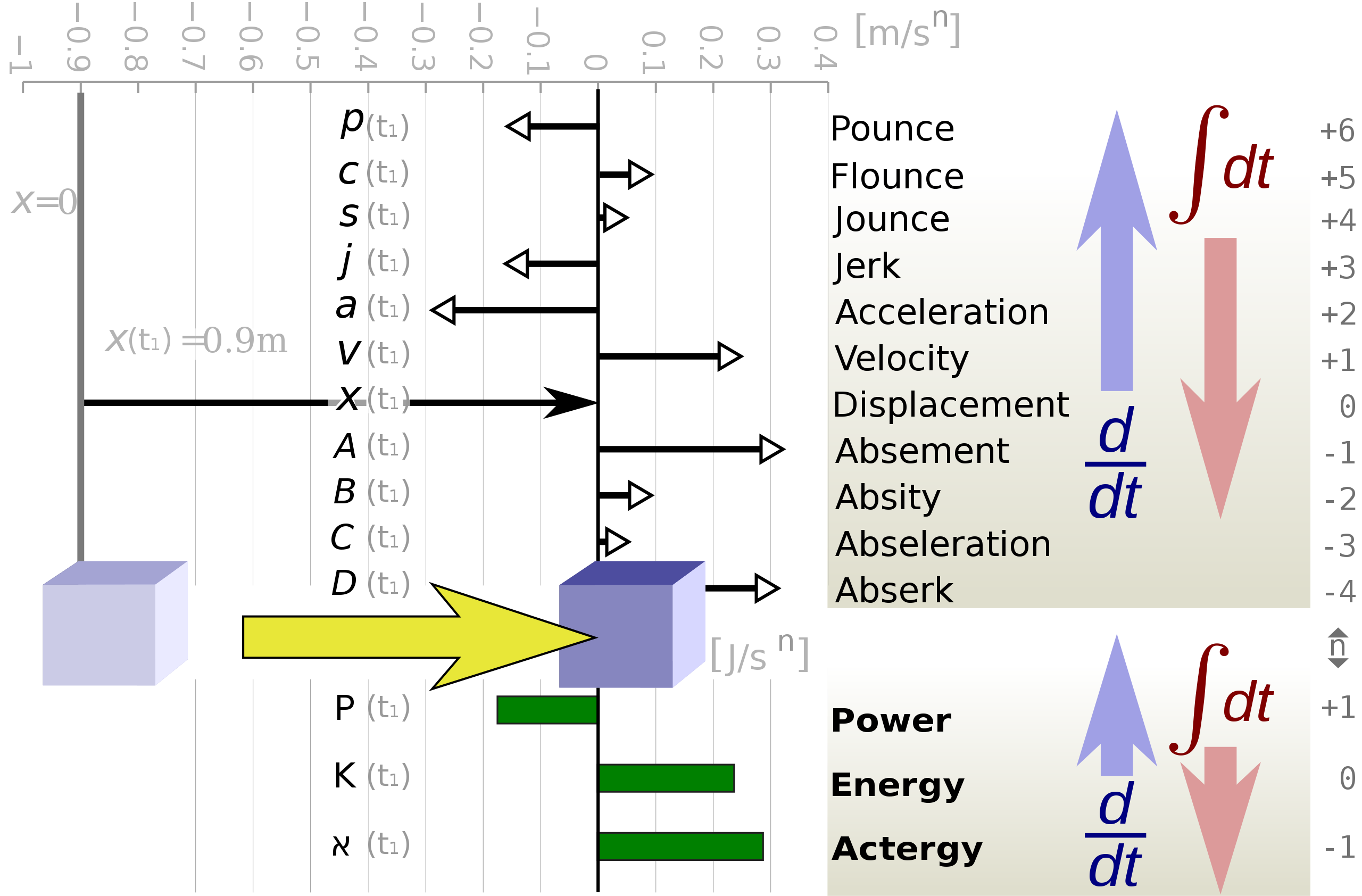 No, we only have "скорость" for both speed and velocity (and we literally say "vector speed" (векторная скорость) if we talk about velocity in a scientific context). And we have "ускорение" for acceleration.

Yep, the Wikipedia says, that the d²v/dt² is a "рывок", but to be honest I don't remember this term from the university courses.

Maybe there are some exotic terms in very narrow areas of physics, but it would be easier to say "производная скорости N-степени".

I'm neither a native speaker nor a physicist, but I can offer some insight and can't resist posting an answer. After all, it is not every day that a mod asks a question :)

First of all, as an important aside, those who say or imply that the derivative of acceleration is never needed in physics should have better listened to their physics teachers at school. Perhaps the most obvious example is the Abraham-Lorentz force. This is the recoil force on an accelerating or decelerating charged particle caused by the particle emitting electromagnetic radiation and is equal to

where Q is the particle charge, ε0 is the electric constant, c is the speed of light, and da/dt is the time derivative of the vector of acceleration. You can verify this formula in the Wikipedia article I linked above, and that article explicitly refers to that derivative as to jerk, which is the same term as used by you in your question.

For those who attended school long ago and forgot the basics, the Abraham-Lorentz force is one of the very central things in physics, because this is how the classical model of the atom is disproved. Indeed, long time ago people believed that electrons move around the nucleus just as planets orbit around the Sun, and such a naive view is easily dispelled if you know about the Abraham-Lorentz force. The latter would make the orbiting electrons quickly lose their energy and spiral towards the nucleus. Indeed, an electron orbiting with a constant speed on a circular orbit experiences a centrifugal acceleration, and the vector of that acceleration rotates together with the electron itself, resulting in a non-zero time derivative of that vector. And that derivative is directed against the velocity of the electron. So, according to the above formula, this is where the Abraham-Lorentz force is directed. So you need a quantum theory to explain stable atoms.

To name another example, there is a gravitational force similar to the Abraham-Lorentz force, that is, the recoil force on an accelerating or decelerating astrophysical object caused by the object emitting gravitational waves. And that force is proportional to the time derivative of the vector of acceleration, if my memory serves me well. Our planet is acted on by that force, but doesn't spiral towards the Sun. Why? The force is so weak that its power is comparable to the power of an ordinary electric lamp, which is nothing on the astrophysical scale. And this is why gravitational waves are so hard to detect.

I also vaguely remember my physics teacher telling me that railway track damage is caused by the derivative of the vector of acceleration, but I can't recall why. I hope I am not mixing things up :) But it is because of that, as I am recalling, that circular portions of a railway track never abruptly join straight portions: instead, the curvature changes slowly.

So the derivative of acceleration is an important quantity in physics.

Now back to the question itself.

I just asked a guy whom I had helped improve his English in his physics articles. He is a physicist, albeit Japanese, not Russian.

He says that in the scientific community, there are no really established English terms for derivatives of acceleration of any order, so jerk is at best a jargon word used by some physicists working in some very special fields. All other physicists would react to a quantity being called jerk similar to how English speakers would react to girt :)

Come out of your house with your hands in the air, we have you girt! (Link)

(Watch the above referenced video fragment, Adam Hills is a genius :) )

I think it is very reasonable to think that the same applies to Russian, and I found some evidence for that:

(1) I just looked for the exact phrase испытывает рывок in Google, and all or practically all search results do not imply the derivative of acceleration. The intended meaning is always or almost always experiences a jerk as a sudden movement in the most common sense. So if you say испытывает рывок, no one will think you mean the derivative of acceleration.

(2) I managed to find a Russian physics article wherein рывок is used as the time derivative of acceleration, but the authors explicitly define рывок in the abstract:

Since the authors had to define рывок in the abstract(!), it stands to reason that рывок isn't a really established term in the Russian physics community.

And if рывок is not an established term, even despite the importance of that quantity in physics, why would the higher-order derivatives have established names?

So the answer to your question seems to be that there are simply no well-established, widely recognizable Russian terms for derivatives of acceleration of any order. You just call them the n-th derivative of acceleration if you want to be understood. Otherwise the reader well may get an impression that you, as Russians put it, wrote your article по накури :)

I think there's nothing there, because why do you need it?

However, I can see from Wikipedia that Polish has Udar, so you can just take that one and use удар for fourth derivative. I don't think they have anything for fifth, etc. I would say you don't even need third derivative because you should move to e.g. vectors at that point.

To the best om my memory in my physics classes in university we never used any special term for derivatives of acceleration, even "рывок" never came up. Instead they were simple referred to as "first (second, third, etc.) derivative of acceleration".

Not the answer you're looking for? Browse other questions tagged терминология or ask your own question.