Before 1957, what word or phrase was used for satellites (natural and artificial)?

In 1957, Sputnik was launched. The word "sputnik" can be used for satellites in Russian or English.

Before 1957, was "sputnik" used that way? Did Russians have a different word or phrase?

I'm interested in natural and artificial connotations. For example, in English we can say that the Moon is a natural satellite of Earth. How would this be said in Russian before 1957? What about the concept of artificial satellites in science fiction or proponents of rocketry, such as Tsiolkovsky in the early 1900s? What word did he use for satellite?

P.S., I understand the rough translation of "sputnik" is something like "fellow traveler". But I don't know if such a meaning is odd or unusual in Russian when applying to natural satellites such as moons or asteroids.

This was not a new word.

The original meaning of the word спутник is traveling companion. It has been used in this sense since the dawn of the modern Russian language.

Similarly, the use of the word in the sense of a satellite of a planet has a long history.

For artificial satellites it came into use as soon as the concept itself came about, in the Tsiolkovsky books, as you surmised.

Here is a scan of the October 5, 1957 announcement from Pravda: 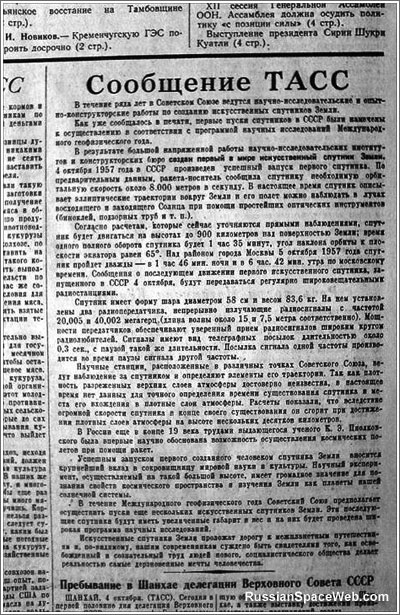 This can be translated:

For many years now scientific research and the construction of prototypes has been going on in the Soviet Union with the goal of creating artificial Earth satellites.

Notice that the word спутник (satellite) is not capitalized and is qualified by the adjective искусственный (artificial). We could just as well have translated the last part thus:

...with the goal of creating artificial moons of the Earth.

The New York Times in its story the same day Soviet Fires Earth Satellite Into Space called it a moon three times starting in the third paragraph:

The official Soviet news agency Tass said the artificial moon, with a diameter of twenty-two inches and a weight of 184 pounds, was circling the earth once every hour and thirty-five minutes. This means more than fifteen times a day.

So on October 5, 1957 the word "спутник" was already well-understood to the Russian reader in the metaphorical sense of a moon, an object in orbit around a larger body.

Interestingly the article in the NYT does not use the word "sputnik" once. But the next day they ran a follow-up story about the Russian word entitled Soviet ‘Sputnik’ Means A Traveler’s Traveler. Within weeks the English-language press had adopted the Russian word as a proper noun and was referring to the first artificial satellite as "Sputnik I".

This process in which a Russian word was adopted into English with only its newest meaning preserved is not uncommon. It can happen to English words too when Russians borrow them.

For example a decade or two after Sputnik I the English word "sex" entered Russian, but only with a meaning which many Americans still considered slang. Today one can use секс to refer to the sex act, but would not be understood if we were to use it to say things like "the female sex" or "the battle of the sexes".

Another example is the word сепаратор (separator) which refers to a device used in a dairy.

This answer is based in two articles which I wrote earlier:

The word спутник meaning "a satellite of a celestial body" was coined, as were many other Russian scientific terms, by Mikhail Lomonosov.

Not the answer you're looking for? Browse other questions tagged этимология terminology or ask your own question.