I was watching an episode of Better Than Us" (Лучше, чем люди) in Russian with English subtitles. Since I was actively watching, to the extent of making a vocabulary list from it, I noticed that the Russian for "Let's go!" was not "Пойдём!" Curious, I replayed this section in Russian, and, sure enough, it isn't what was said. So I took a screen shot of the Russian transcription as well as the English. See below: 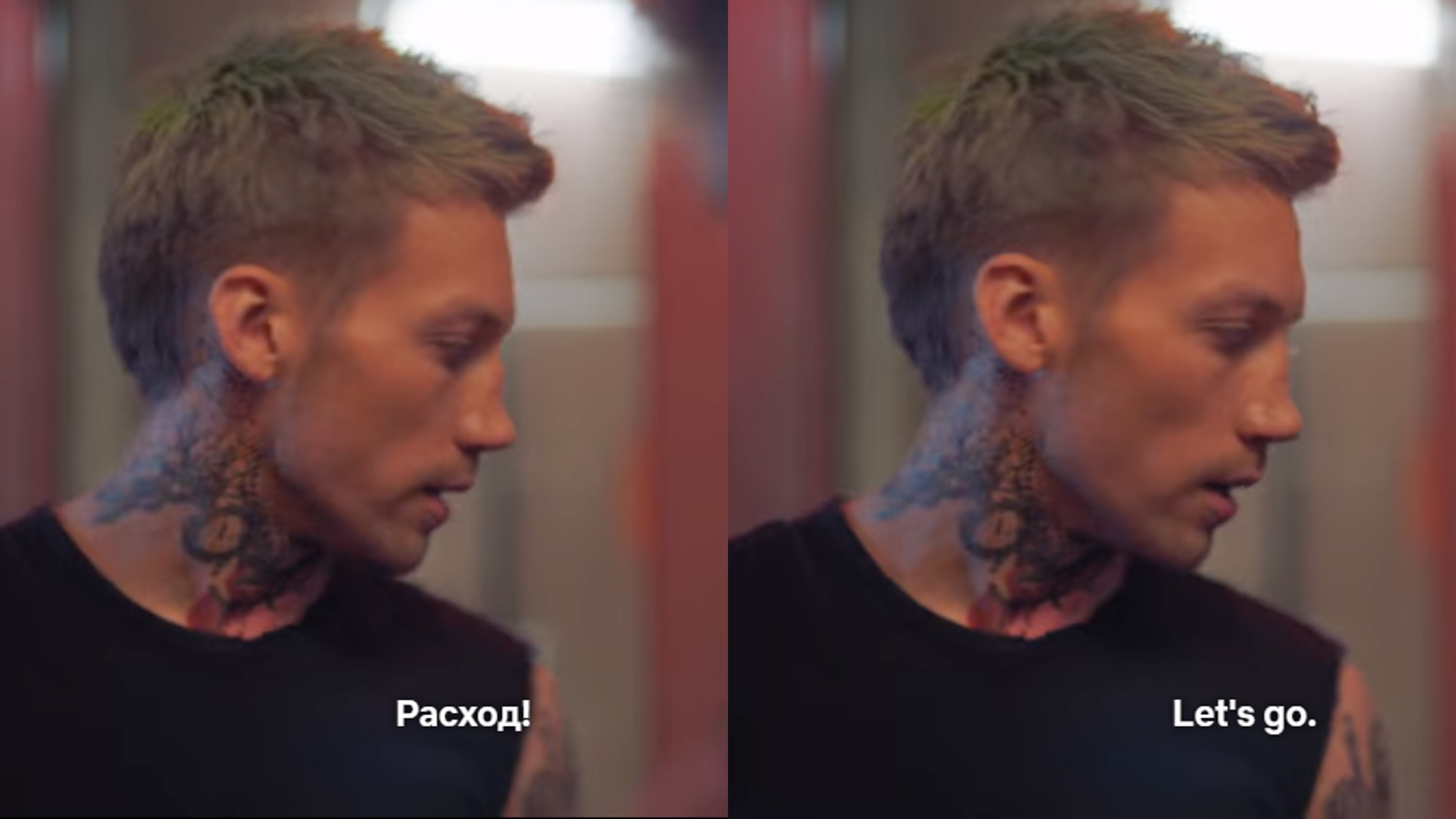 The word "пойдём" makes sense to me as a translation of "let's go" but as a translation for "расход" is entirely new to me. Is this common among Russian speakers, or is this a bit of poetic license the translator(s) of this series is/are taking?

By the way, I find it amusing that the Russian includes an exclamation mark but the English doesn't.

The character is saying расход! indeed, which is supposed to mean "scatter!", as a command.

This is not a mainstream word, but its meaning is obvious to a Russian speaker.

Russian sports and the military, historically, to a large extent owe their vocabulary to Germanic languages like English, Dutch and German.

To a Russian speaker, these commands look and feel like nouns.

I can't remember where, but I have read a hypothesis that this fact had given rise to the habit of using nouns as commands like огонь!, бой! etc., and even back-forming them specifically for this purpose: пуск, останов, etc.

This word is apparently a back-formation from расходись "disperse, scatter" as well, intended to sound like a military command.

It is not a real military command, but that's apparently what the dialog author had in mind.

It sounds, at least to my ear, like the character is faking the military jargon without actually knowing it, but I haven't watched this show, so this might as well be the intended effect.

I did not find the specific invocation, but there are two possible uses of this word:

Turning the verb расходимся (we part ways) to a noun. This is unusual but can surely arise in a subculture slang. Note that пойдём has an opposite meaning since it implies shared action.

Also, the word расход means getting rid of someone, usually by murder: пустить в расход. I doubt it is relevant here directly but needs to be mentioned.

I can't catch this moment, but it's wrong to use the word 'Расход' in meaning 'Let's go'. It's either specific slang in film or wrong subtitles.

In this episode, the word "расход" is an abbreviation for the word "расходимся". The character who uttered this phrase is laconic and is explained with other short words-orders, so it is not surprising such a reduction. This is most likely such a find of the scriptwriter, but for a Russian-speaking person, such a command may sound ambiguous: it can be understood how "расходимся" (disperse), and you can understand how - "пустить в расход", that is to kill

Don't know the context, but this is probably a slang command to end a meeting, most likely abruptly. I'd say the most appropriate translation would be "Let's scatter," although "Расход" doesn't necessarily mean parting quickly. There's a more slang-heavy expression "по расходу", used in a phrase like "Ну что, по расходу?", meaning a suggestion to walk apart.

It literally means something like "the going apart from each other." Saying that is like saying "break it up." It's not the same as "let's go" and is just creative slang. I would interpret that as "everyone get out of here and do what you need to do." I've never heard anyone say that and I don't think it's a common way to break up a meeting.

"let's go" is not a correct translation, but I have no idea if a correct one is possible, since it relies on cultural tropes. "Расход" is the state of "расходится", i.e. go separate ways. The speaker is stating the state of something, with the unspoken implication that since he is the leader, it's his desire for the state to become a reality in the immediate future. This laconic fashion is the way senior army sergeants give orders. E.g. to tell a barracks full of troops to get up in the morning, the order would be a one-word "подъём", i.e. the state of "подниматся", getting up.

What that one word portrays to the Russian viewer(if he is male, he will have gone through this during military conscription) is that the dude has enough command authority over his underlings, that he can just give them one word orders and they are disciplined enough to obey without question.

It's absolutely not common and I doubt that usual person could understand "расход" as "let's go" Indeed, there are several meanings of this word such as "scatter" or even "consumption". This word is absolutely usual in Russian but with another meaning. But in military slang, there is word "расходись" (it's like "разойдись") that you could hear in the marching as the final command - "Fall out!" (or "Dismiss!") I assume that "расход" it's a short version of the "расходись"

5
Why we say "расторг" but "моргнул"
14
Does Проходите really mean come in?
5
When do you use находимся?
3
The use of the perfective
5
Use of the imperative form подели
1
Нет это нельзя - what does it really mean?
3
When do Russians use the expression "Ты смеешься надо мной"?
44
Why do Russians almost not use verbs of possession akin to "have"?
3
Why do Russians say that all men are billy goats (все мужики козлы)?
10
How do I ask "Really?" in Russian?