What is the history behind the word биткоин, why does it have И before Н?

Furthermore, I decided to consult an orthographic (spelling) dictionary, and it confirmed that биткоин indeed has И before Н. I'll try to add link #2 here. Spelling dictonary is a very reputable source!

So can somebody please explain why биткоин has И before Н, or is it a complete mystery?

For comparison, Tolkien dwarf names (from 'Hobbit') are spelled in English as Oin and Gloin. In Russian they are Ойн и Глойн. No matter what translation I encountered (I have at least two available), they are always spelled with Й.

This is a hotly debated subject which is almost as old as bitcoin itself. It seems that биткоин has been winning for the last few years. That's probably why this is reflected in the 2019 Russian Language Institute dictionary. 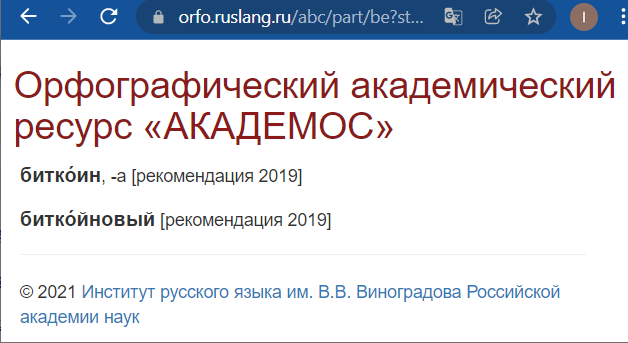 In linguistics, right and wrong is defined by usus. Below are results from Google Ngrams:

And below are the results from National Corpus of Russian Language: 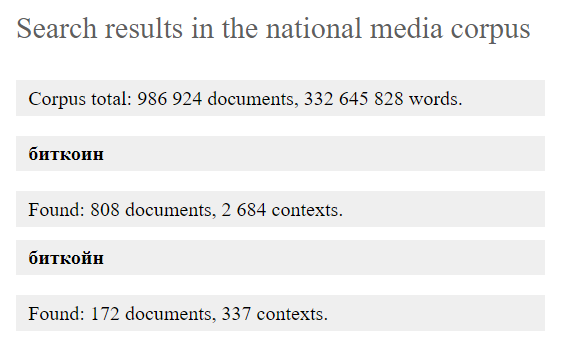 I'm not qualified to speculate about the reasons why биткоин wins out. I would just note that the comparison with Tolkien characters is not very helpful since their names are not widely used in any given community of speakers, and most likely results from choices made by the translators and editors of the Russian editions, rather than Russian speakers in general.

Биткоин has the и before the н because the English word "Bitcoin" has the i before the n.

When adopting loanwords, Russian tends to preserve the original spelling as long as it transliterates back from the original alphabet well enough.

It usually takes some effort to break this habit.

We have words like иод, Таиланд, иена, Иокогама, диакон which are pronounced with the й but spelled with the и.

In the past, Russian also used spellings like биллиард "pool", Иом-кипур, иота, диавол etc., even though all of them were pronounced with the й. These words have since changed their spellings, which are now closer to the actual pronunciations: бильярд, Йом-кипур, йота, дьявол.

Russian also used to transliterate foreign names like Disney, Harvey, Halley, Defoe, Crusoe, Boccaccio etc. as Дисней, Гарвей, Галлей, Дефоэ, Крузоэ, Бокаччио. I have a Russian-Italian dictionary published in 1934, whose author criticizes this approach, which hints at the fact that it was still widely used as recently as then.

The word биткоин was probably adopted by a substantial number of speakers independently, and then the majority just transliterated it preserving the original и because it just felt more natural to them.

Unlike "ё" which de-facto is totally accepted to be skipped in favour of "e", "й" and "и" by no means that interchangeable in Russian - one can not spell "коиот" instead of "койот".

What you witness here is that instead of having exclusively phonetic transcription, which would have left us with "биткойн" we also have one that just sort of transliterated the word from latin to Russian, substituting "i" with "й".

It's indeed untypical and something new. There's an example of "ио"/"йо" co-existence in words like иод or "иога"/"йога"but I can not recall of any other Russian word where "ои" will be pronounced as "ой".

Not the answer you're looking for? Browse other questions tagged орфография or ask your own question.

1
What are the exact orthography, etymology and explicit semantics of галимо/голимо?
11
What distinguishes the "hushers" (ч, ш, щ, ж) linguistically from other consonants?
10
What function does the soft sign ь have in a word like учишься?
6
What are the origins of the чу/щу rule?
6
What is the use of the soft sign in front of (soft-indicating) vowels, in words like "компьютеры" and "пьёт"?
13
Why is the Turkish president's surname spelt in Russian as Эрдоган, with г?
6
Why was it decided in 1956 to abolish the spelling чорт (devil) in favor of чёрт?
1
First conjugation verbs and first person singular in -ю or in -y ? What is the phonological or orthographical underlying rule?