A (apparently inciting) political poster has been posted in the city of Kamianske, reading as follows:

My friend (non-native) translated it as "after my son had voted for the 'regions', I found out, he rewrote 'hut' to 'cat'", but could also not make sense of it.

I gather it is somehow ridiculing the 2016 renaming of Dniprodzerzhynsk to Kamianske, but I would like to understand the statement completely. It seems like there is some wordplay I don't really get, referring to the Ukrainian accent or something?

I learned about this poster because somebody sent me this meme, replacing 'регіони' with 'НКР', which I also don't understand. 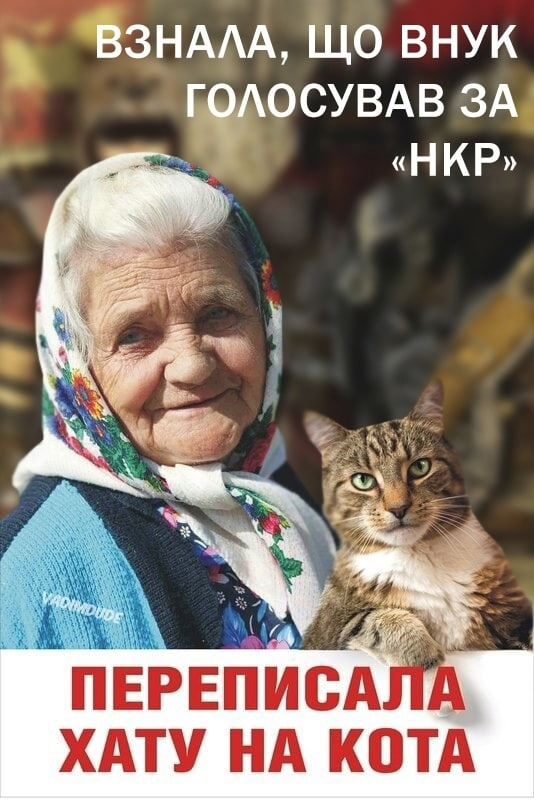 Apart from main meaning "to overwrite" переписать also can mean "to reregister". "Переписать на кого-то" means to change some legal record so that ownership is reassigned to a new person. It is not necessarily a hereditary thing. One can say: "Я переписал машину на жену, чтобы было меньше головной боли" (I signed the car over to my wife, so there'd be less headaches.)

The text is in Ukrainian, not Russian. It reads:

In Russian it would be:

While it would make sense for NKR to refer to the Party of Regions, I can find no evidence it is ever called the NKR.

Russian and Ukrainian are both Slavic languages. They use similar alphabets, have similar pronunciation, and much of the vocabulary is the same. However, mutual intelligibility is only around 50%, mainly because some of the most used words are different, plus there are differences in which verb conjugations predominate and differences in the meanings of shared words. And in Ukrainian there is more use of possessives, an additional masculine dative ending, and extensive use of the long form of the feminine instrumental singular (-ою).

Here for example, the grandmother says "що" rather than "что". This is not an attempt to represent a Ukrainian accent, that is simply the Ukrainian spelling. She also calls her house "хата", a word quite rare in Russian. And she says "голосував" which in Ukrainian means simply "he voted" rather than "having voted" as it would in Russian.

The verb переписать is used in both languages. It is composed of the prefix пере- which indicates a transfer and the verb писать which means to make a writing. Signing real estate over to one's children instead of willing it to them is a common practice in Ukraine. Signing her house over to her cat has the same effect as disinheriting her grandson.

"Регионы" is a political party. "Переписала хату на кота" means that the apartment was bequeathed to the grandson, but then he voted for a party that the grandmother doesn't like. The grandmother decided that it would be better to bequeath the apartment to the cat instead of her grandson аnd rewrote her will.

I've found the origin, and more context here. This is a poster for a Fallout game mod, and "НКР" here probably stands for "Новая Калифорнийская Республика", New California Republic. It doesn't make much sense really, as this is not a political party which you can vote for. The original meme referred to the Ukrainian Party of Regions.

Not the answer you're looking for? Browse other questions tagged выражения or ask your own question.