What's the difference between -либо and -нибудь?

The pairs кто-нибудь and кто-либо, когда-нибудь and когда-либо etc. have slight differences in meaning, and each particle is used in specific settings, but I can't quite pinpoint what the difference is.

How can it be explained or described?

Words with "-нибудь" may have a secondary connotation: "of any quality, no matter how bad", which words with "-либо" would lack:

Как-нибудь (but not как-либо) could also mean at some time (in the future):

After college, I'll find [at least] some job.

In this senternce, you can't use какую-либо because the set is undefined and because you mean "at least".

I don't want any [no matter what] job related to programming.

In this sentence, you can't use какая-нибудь because the set is definite — your attitude is the same vis-a-vis all of them, and you don't mean "at least".

In the following questions, the English translation is ambiguous because "somehow" may mean either "by any actions" or "with any result". In Russian the как-либо/как-нибудь disambiguates.

Are there any ways to somehow survive on social aid ("by some tricks or methods")?

The speaker is asking for methods and advice on how to survive on social aid.

Are there any ways to survive on social aid somehow ("good or bad, at least barely")?

The speaker is asking if it's at least possible to survive on social aid, even with a low quality of life.

If you're planning to somehow ("in this or that way, by the means of your choice, no matter how") cross the border, immediately report to the embassy.

This implies that the speaker expects there are multiple equivalent ways to cross the border.

If you're planning to somehow ("with trouble or without, easily or with some effort, at least barely, even with losses") cross the border, immediately report to the embassy.

This implies that there are possibly no legal or safe ways to cross the border, or that such ways are unknown to the speaker.

I'm answering this question even though it's old because it seems to me that though there are already several interesting answers, none of them is simple and direct.

Words ending in -нибудь refer casually to something unknown to the speaker which someone might want to mention. Words ending with -либо add the nuance of "at all" or "whatsoever" and thus call for strict interpretation.

@FlashCactus says that -либо sounds more official. But this is not a mere matter of style; it's because -либо conveys an idea which officials often need to convey.

For example, at a dinner party you might be asked:

Были ли вы когда-нибудь в России?
Have you ever been to Russia?

Here the question is whether you have ever visited Russia. If you have, then you can have a conversation about it. They're not asking you if you have ever passed through Russia briefly to get somewhere else.

But what if a customs or immigration official asks you:

In this case they're not interested in whether you ever had a chance to experience Russia. They're enforcing formal rules, and as such, want to know about any visit — no matter how trivial you may consider it.

It is hard to formulate the difference in words, but there are contexts, in which "-либо" is a better word choice than "-нибудь", while in other contexts, "-нибудь" is better than "-либо".

For more information on where these contexts come from, have a look at the introductory part of this paper, for example.

The difference between Кто-нибудь and кто-либо is akin to that between somebody and someone.

I don't really have much new to offer to this discussion, but I was recently studying this topic and came across a section on this in the book Modern Russian Grammar. Since few sources are cited in this thread, I justify adding an answer on that basis alone, even though the answer itself may not offer much of anything new. Without further ado, allow me to cite some information from this source:

Many dictionaries describe the -либо series as being synonymous with the -нибудь series, and they are indeed similar in meaning. Nevertheless, there are some contexts where the -либо series does seem to be preferred.

Pronouns from the -либо series can be used to translate 'any' in a negative construction:

Notice that the book just states that -либо can be used for this and somewhat hints that it may be preferred if you refer to the preceding paragraph. I must admit that any preference in this regard is somewhat difficult to prove, but when I tested the following phrase

after only about five minutes and trying a few different search parameters, I did manage to see this reflected. Results from this cursory effort in the chart below: 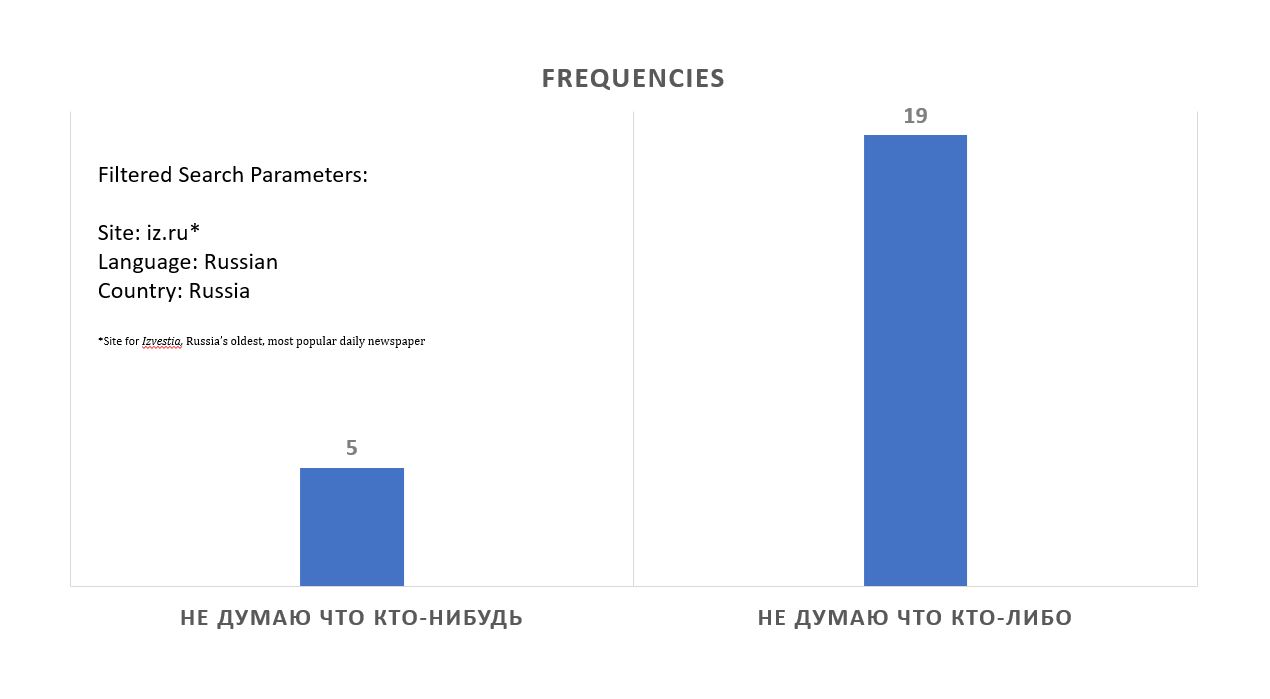 Trust me, if you're not careful with your search parameters, you might easily get the opposite impression on this point.

Pronouns from the -либо series are also used in comparisons after чем:

This point was far easier to prove. The Google n-gram clearly shows which variant is more frequent:

In some contexts pronouns from the -нибудь and the -либо series are indeed interchangeable. The latter tend to be more characteristic of formal language, but if there is a difference in meaning, it is that the -либо pronouns emphasise that it really does not matter who or what is involved:

If in doubt on which to use, I'd opt for a form with -нибудь, simply for this reason alone:

Not the answer you're looking for? Browse other questions tagged лексикон выбор-слова pronouns semantics or ask your own question.

3
How do you most commonly use чей/чья/чьё/чьи?