I have been thinking about starting to learn Russian and one thing I have noticed is the huge difference between handwritten Russian and typed Russian. Why is there such and difference and how did this come about?

As for difference between written and printed form of the letters, here is my personal experience:

When I studied English handwriting to me the small letters k (looks like small R), r (is written backwards), s (looks like triangle), z (suddenly has a loop below the line) and the capital G (looks like Y), I (looks like Я), Q (a huge 2), S (big triangle), Z (doesn't look like Z at all) looked completely different from their printed counterparts. Maybe this is because they are "optimized" for fast writing.

Also, it looks like as time goes by the printed letters may change, while handwritten ones stay almost the same. For example in this answer about letter Л you can see that its modern form become popular in 1840, while before that time printed and handwritten Л had the similar "angle-shaped" form similar to Greek Λ.

Another question was about difference between printed т and hand-written т. And looks like the difference is also has historical roots - both letters had almost the same shape before 1708 reform by Peter the Great. So, looks like handwriting is more conservative than printed fonts.

Now about usage of handwriting. This is called a cursive script. According to Wikipedia:

Cursive, also known as script, joined-up writing, joint writing, running writing, or handwriting is any style of penmanship in which the symbols of the language are written in a conjoined and/or flowing manner, generally for the purpose of making writing faster.

In the Persian, Arabic, Latin, and Cyrillic alphabets, many or all letters in a word are connected, sometimes making a word one single complex stroke. 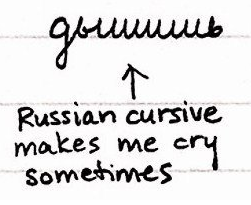 So, before the invention of a typewriter in 1860 it was the only way to compose a document. But even after that cursive was used in personal correspondence.

In USSR only official institutions and companies (and professional writers) typed their documents using typewriters, but even to prepare a long document it could be prepared first by the hand and then sent to "машбюро" a typing office. All the requests (e.g. for the vacation etc.) were written by the hand and never typed (you can sometimes meet this requirement even today - "the request should be hand-written using blue ink"). Also you could rare see the preprinted form where you should just fill in the gaps - usually you had to start from the blank page and write all the document yourself.

To apply for a Ph.D. one had to write a Doctoral Dissertation which in printed form has several hundreds of pages - in 80'es this was made by the hand and then sent to a typing office where it was typed for several weeks.

So, if you try to write several pages in block letters - it will take enormous time and effort. The cursive is much faster and easier to write.

Now, when the computers and printers are widespread you don't have to write so much. But still in some areas computers are rare and you likely will have to write any documents there in old-fasioned way.

Russian cursive letters (from this answer): 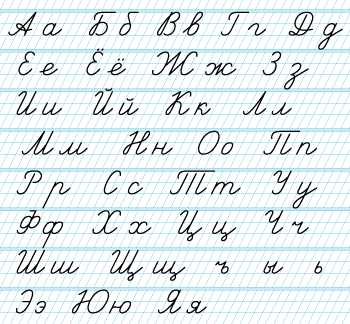 An here is the English cursive. In Russian schools the pupils are also taught to write this way: 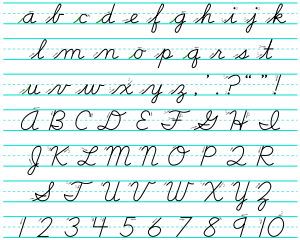 It is interesting that in the US the cursive is almost extinct:

On the 2006 SAT, a United States post-secondary education entrance exam, only 15 percent of the students wrote their essay answers in cursive.

In 2012, the American states of Indiana and Hawaii announced that their schools will no longer be required to teach cursive

This might be wild speculation, but I suspect it is because writing curves etc. by hand is fast, whereas cutting out a proper curve of a piece of wood to make a stamp is comparably hard. Cursive handwriting is designed to be fast and easy for a human operator. But printing text with letters has different requirements. I would say the typeface "diverged" simply due to some economic choices along the way.

German typeface also looks a lot different from my handwriting, if I write the way I have learned it in grammar school. I guess this can be observed for probably any language. Yet, English cursive handwriting seems to be an old form of art not taught any more in English schools, where they seem to prefer writing in block letters. Therefore it might take a bit more getting used to cursive writing for English native speakers. (Apologies if I generalized too much.)

Not the answer you're looking for? Browse other questions tagged typography or ask your own question.

45
Why does italic 'т' look like 'm'
9
How common is angle-shaped Л in modern Russian?