I've been always wondering what are the origins of this expression? I searched through the net and found few discussions on this issue:

However it looks more like guessing and assumptions. Does anyone have any idea where does it really come from?

First of all, it's usually very hard to find a "real origin" for a common saying (unless it was coined by someone in writing). The common sayings constantly develop, change their meaining, get contaminated etc.

Now, another portion of speculations (just in case, I'm reciting Русская Речь from memory, it's not my own speculation).

Возить воду is a common metaphor of a hard and ungrateful labor, and на нём можно воду возить is told of a physically strong but meek and servile person who won't protest against such a labor. This does not correspond to any of meanings of сердитый: angry, grumpy, irate.

The second reading makes much more sense to me: if you are so angry, we'll use a stubborn horse to deliver your water, and waiting would cool you down.

However, later the second portion was lost, and the proverb changed its meaning. It became: if there is something too much in your character or behavior, you'll be forced to deliver water.

"Something too much" may be сердитый (too angry), обиженный (too resentful), добрый (too kind) etc., and all these variants are mentioned in the corpus. Only the last meaning makes sense and it seems to be the latest reinterpretation.

There is a legend in St. Petersburg that angry water carriers who treated their horses bad were forced to harness themselves into the water carts and feel on their skin what do the poor animals feel.

Here's the photo of the monument to such a carrier I made near the St. Petersburg Water Museum in 2010: 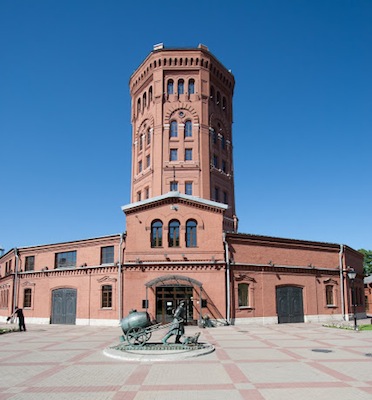 The actual entry in Dahl reads as

This I believe invalidates the second reading and the second part seems not to be a part of the saying at all.

The Dahl's reading, I believe, is that an industriuos, hard-working horse would be used to carry water, which might be a warning against being too much of an eager beaver.

Not the answer you're looking for? Browse other questions tagged этимология выражения saying or ask your own question.