The history and meaning of "ни фига себе"

I understand how the expression is used pretty well, but wonder where did it come from?

What exactly does фиг mean?

Ни фига́ себе (or a more vulgar ни хуя́ себе) is a dysphemism of ничего себе, an interjection expressing amazement or astonishment. Such dysphemistic expressions are quite common (compare English my ass! from my eye!).

Ничего itself is a meiosis, quite specific to traditional Russian culture with its cult of humility and reticence.

Quoting an article from Русская речь:

Фиг, or фи́га is an obscene gesture in Eastern (and Slavic, in particular) cultures: 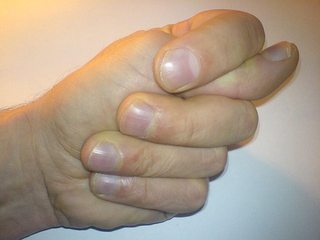 with the obvious meaning.

According to Vasmer and Chernykh, it's originated from Italian fare la fica (through French faire la figue). Fica literally means "fig", an euphemism for vulva.

"Фиг". How I use it in Russia as a nativespeaker?

PS1: "Фига-с-два тебе" is a rare form of this word's usage. It doubles the force of the refusal. Means "take my two figs".

"Фиг" is the most common form for kids.

"Хрен" means "horseradish" in russian (used because it is bitter) and it is much less common for kids.

"хер" and "хуй" are the words for male genitalia. The later is the most filthy language, so try no to use it. And it is unappropriate for kids to use this forms either... but you know the kids these days...

So "fig" is a very common word, that is used when you want to swear a little bit, so that your friends or even parents doesn't think very badly of you.

Some history versions on the Wikipedia page of Шиш (all phrases are colloquialisms):

It's exactly not the same with english "f"-word, you can't say "фиг you!". At least now. Before it was probably.

People usually say this phrase when they're shocked (in goood or bad meaning of this word). For example: 1) "Hey, I won 3.000.000 $!" "Правда? Ну нифига себе!" - here we can see something like admiring and a bit jealosy probebly.

2) "You know what happened? he said we must pass 5 exams more!" "Нифига себе! In other universities students pass only 3 exams each month!" - it's negative judgement.

The history of the word and meaning "фига" is in Old Russia. "Фига" is a synonym of such russian words as: "кукиш" and "шиш". These two words meant gesture above, and people believed that it can help to protect themselves frome the evil eye and etc.

Ozhegov's dictionary (1986) says that фига or фиг means the same thing as кушиш which is defined as follows:

"The fist with the thumb inserted between the index and middle fingers as a mark of contempt, abuse."

Ozhegov does not explain what object, if any, this gesture might represent.

Ozhegov dictionary also states that the expression "Фига (с) два." is "a rude expression of denial or diagreement" and that "Не фига." means the same thing as "Не чёрта."

While Ozhegov describes certain expressions using the word фиг as rude, and the gesture as contemptuous, he does not in any way suggest that they are actually obscene.

@Artyom says that фиг is “a very common word, that is used when you want to swear a little bit, so that your friends or even parents doesn't think very badly of you“. I believe this is correct.

@user4599 claims that showing someone the фиг gesture is the equivalent “giving someone the finger” or using a certain expression of contempt containing the F-word. Its meaning is the same, but the level of vulgarity is very, very different. As @Artyom pointed out, “фиг” is a mild swear word. But, the F-word is just about the strongest swear word available.

Any expression containing the F-word occupies the highest level of coarseness. It is a word which is not supposed to be used where women and children can hear. Though it has existed in English-language subcultures for centuries (Shakespeare seems to have slyly alluded to it, there is evidence it was used by soldiers during the American Civil war, and it can be found in a few 19th century court transcripts), it is considered “unprintable”. Its use in public was quite literally so unacceptable that nobody would print it even in a dictionary between about 1600 and 1950. To this day mainstream newspapers will not print it and it is covered by a “bleep” noise in radio and television broadcasts. Films containing it are labeled as unsuitable for children under 13 years old. If it is used more than three times as a meaningless exclamation or even once to refer to copulation, then children under 17 will not be admitted without an accompanying adult.

I have noticed some cases where Russians seem to underestimate its offensiveness. They may offer it as a translation for mildly rude Russian expressions. Also, I have heard it unbleeped when performers in Russian-language programs use it even though other coarse words they may use are bleeped out.

I think there are two reasons for this misunderstanding. The first is that when American movies are dubbed into Russian, the “seven dirty words” are translated using relatively mild expressions such as "Боже мой”, “ерунда”, “подлец”, and “паразит”. The second reason is that if you do not know the cultural background which explains why some Americans talk like sailors in front of women and children, you could get the mistaken impression that the F-word is a mild cuss along the lines of “damn”.

Not the answer you're looking for? Browse other questions tagged лексикон этимология выражения мат значения or ask your own question.

11
What is the meaning of "напортачил" and "портак"?
41
The meaning of "давай" when saying good bye
5
Where does the word Хамовники come from?
7
What does the phrase "увидеть небо в алмазах" mean?
3
Nuances between "ничего себе" and "надо же"
7
Meaning of "намылить ему шею"
3
The meaning and usage of the expression "с моей легкой руки"
3
What is the origin of the suffix -он?
3
Лысая башка, дай пирожка - what does it mean?
4
Exact meaning of "припизженный"