Does the verb 'убивать/убить` require the genitive plural case for the object?

I refer to the WW ii propaganda poster of the tiger shown with a bayonet thrust into its throat. 'убей немецких зерей!' reads the tag. Does the verb require genitive plural case?

It's not genitive, it's animate accusative. Or, if you like, it's a historical genitive that's considered accusative for all intents and purposes.

The animate/inanimate distinction affects all nouns in the plural, and masculine ones (other than the ones ending in -а/-я) in the singular. Humans and animals are grammatically animate. Plants and microorganisms aren't. A curious situation exists with words for dead people; мертвец and покойник are animate while труп isn't, and neither is призрак "ghost".

If that seems complicated, the good news is that the only expression of the animate/inanimate distinction is the one you're asking about; the accusative case of animate nouns coincides with the genitive rather than the nominative. Adjectives attached to an animate noun in the accusative also inherit the "technically genitive" case ending. That's all. (A number of other Slavic languages, such as Czech, have more complicated animate/inanimate distinctions, which also affect the nominative plural.) 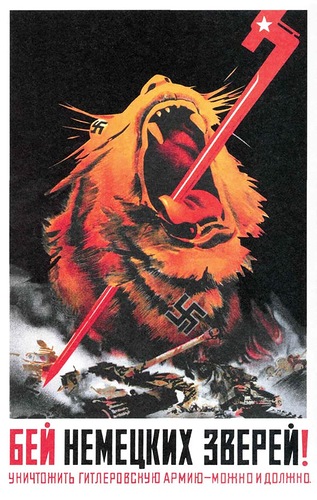 The slogan is a double entendre: "beasts" could mean Nazi tanks named after animals ("Tiger", "Panther" etc., as shown on the poster) as well as Nazi themselves.

The author could use a synecdoche ("one instead of many") and say бей немецкого зверя, but this way the first meaning would be lost: you should not just kill many beasts, but many types of beasts.

The plural used to personification, it implies that Germans (soldiers) are beasts and you have to kill (literally) many of them.

The singular 'убей немецкого зверя!' is OK too, but different meaning: you have to kill (in a figurative) Germany (as a country) or fashism (as an ideology) or like that.

Not the answer you're looking for? Browse other questions tagged падежи or ask your own question.

5
Which case is used for the word "домой"
3
Cases taken by verbs
3
Third Person Plural Pronoun for Inanimate Objects in Accusative Case
6
Use of prepositions "от" and "из" for indicating a cause in Genitive case
6
Is there ever a time when one uses по́ле to refer to the floor?
7
Why do some nouns take the genitive case instead of the accusative?
4
Case and number of words in a label (as opposed to words in a sentence)
2
What is the rationale for using the genitive "этого" in "этого недостаточно"?
1
The history of which case to follow after a number in the nominative case

// TODO sg: TMP solution until we are confident in our current implementation of async imports // once we are, we can move the if into the js entry file and dynamically load the mark obsolete module