In reference to Adjectives what does "anim." mean?

I'm a beginner to Russian and I was learning the cases for adjectives. For several of the cases there was a different ending with "(anim.)" after it. What does this mean? The table I saw this on: 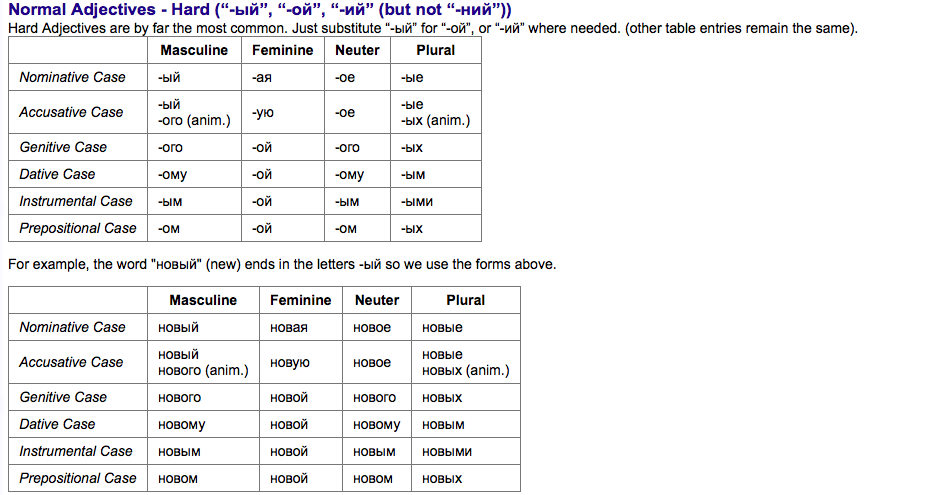 That anim. stands for 'animate'. Russian nouns are classified into

The adjectives agree with nouns in case, number, gender and animacy/inanimacy, so they get their Accusative case accordingly. For example:

Я вижу большой дом. - I can see a big house. (The noun дом 'house' is inanimate, so both the noun and the adjective большой 'big' are in the Accusative case and it coincides with the Nominative case of those words.)

Я вижу большого медведя. - I can see a big bear. (The noun медведь 'bear' is animate, so both the noun and the adjective большой 'big' are in the Accusative case and it coincides with the Genitive case of those words.)

As you can see from the tables, the category of animacy/inanimacy in the singular number nouns and adjectives is realised only for those of the masculine gender, but in the plural number it is realised for every noun and adjective.

This is the very basic notion of the Russian grammar, every beginner textbook must definitely explain it. Read more about it here: Animate and inanimate nouns. Animacy in Russian.

Not the answer you're looking for? Browse other questions tagged прилагательные or ask your own question.

25
How are short and long form adjectives used differently?
8
How to decline adjectives modifying feminine nouns after 2, 3, 4?
1
What is the accusative case for adjectives?
7
"Красная" Площадь
8
What does the adjectival ending -енький mean?
6
«годовая» экспедиция and "year" adjectives
3
Productivity of short adjectives derived from those of -ний type
3
"важные для него события": Is it common to use a phrase like "для него" as part of piled-up attributive adjectives?
3
Adjectives in -ья, -ье
0
How do you determine when an adjective is a soft adjective when the ending is not ний